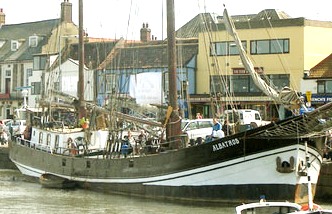 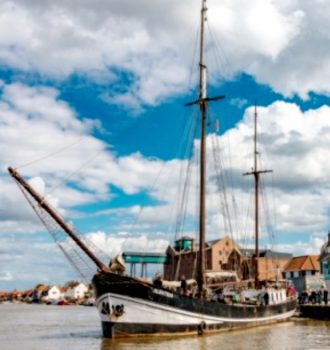 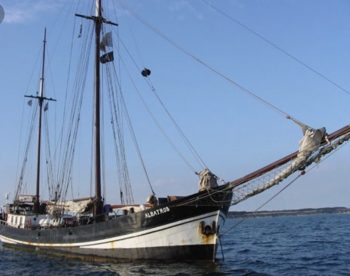 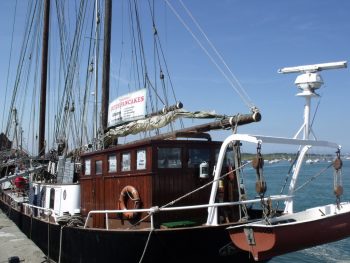 ALBATROS” is a Dutch North Sea Clipper built in 1899 as a cargo vessel for the trade between Holland and the Baltic. She was fully restored to her former glory between 1983 and 1988 and sailed the North Sea and the Baltic,

as the last freight carrier under sail in the regular trade in Western Europe till 1997. In 1998 “ALBATROS” was converted to a sail training and passenger ship with Classification Z1.2.3.4 from Register Holland with IMO number 5008356.

She made her last commercial sailing trip with passengers in 2008.

The ship has been moored on The Quay in Wells-next-the-Sea, Norfolk. NR23 1AT.  She has been used as a fully licensed Bar and Restaurant, B&B and Music Venue. She has been kept and maintained  in a seaworthy condition.

Passenger carrying coding has expired. She is over 24m so would require a qualified Skipper to move the vessel. Last out of the water for a hull survey, conducted 2019, report available.

All the marine machinery, rig and equipment has seen very little use, as she has only moved every three years to dry dock.

Approx 90% of the ship’s original plating and structure has been replaced by welded steel during the subsequent stages of restoration and conversion in respectively 1964, 1983-88 and 1997-98. 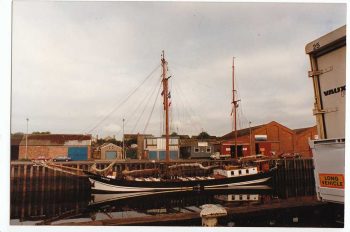 Steep steps leading from the deck to the cabins and the bar.

The toilet and shower facilities.

The six cabins can sleep up to 14 people. All beds and bunks are designed for the tallest sailors and are at least 2 metres long and 80cms wide.

She catered for special events, parties, wedding receptions, birthdays and anniversaries. Capacity of approximately 50 inside up to 85 inside and/or on deck. 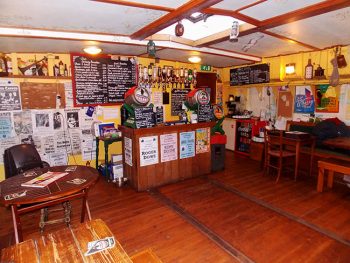 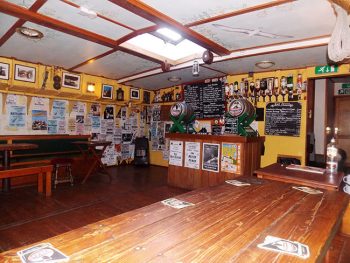 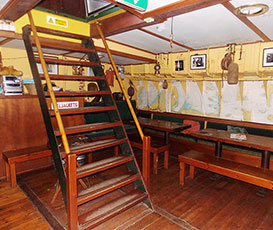 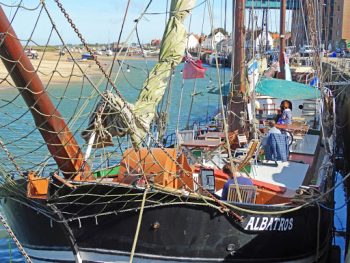 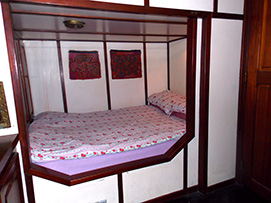 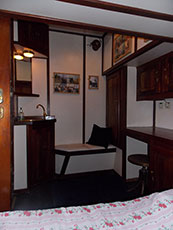 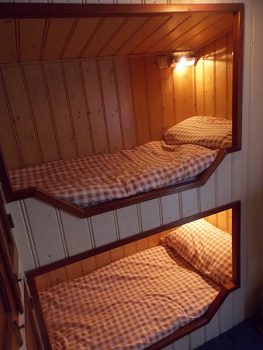 The extensive inventory of Catering, B &B accommodation  and the Bar equipment and gear all remains onboard and is included in the sale.

It is possible that a Business could continue onboard, alongside, on her present mooring . This would be completely at the discretion of the Wells Harbour Commissioners.

Below more detailed information and crucial facts about the ship’s transformation and conversion from a cargo vessel built in 1899 to what she is now:

1899: Albatros built near Rotterdam as a cargo ship of riveted steel construction for the trade between Holland and the Baltic.

1964 After 65 years of service her Danish owner Capt Rasmussen replaces the whole 180 square meters of the ship’s bottom riveted plating by new welded plating as well as large parts of the ship’s superstructure. All work carried out under supervision of Det Norske Veritas.

1997-98: After ten years in the cargo trade between Holland and the UK and Scandinavia, the Albatros is refurbished and converted to a fully licensed and coded commercial sailing passenger ship under supervision of Register Holland and the Dutch Shipping Inspectorate.

In the following years the Albatros sailed the North Sea and the Baltic, as a sail training and passenger ship with Classification Z 1.2.3.4 from Register Holland with IMO number 5008356.

Since then she has been stationary on The Quay in Wells used as a fully licensed Bar, Restaurant, B&B and Music Venue all year around.

The bilge of every compartment can be separately pumped out by the ship’s bilge pump which has a capacity of 40 tons per hour. This pump was renewed in February 2019

History of the ALBATROS

1899: Built for Captain Johannes Muller from Middelharnis near Rotterdam and used for cargo carrying between Holland and the Baltic. Survives World War I under Captain Muller.

1941: Lolk sells the “Albatros” to Captain Rasmussen from Hobro (DK)

1941-1945: Rasmussen keeps trading through World War II and uses the “Albatros” to rescue Jews and political dissidents out of Nazi-occupied Denmark to neutral Sweden carrying back guns and explosives for the Danish Resistance crammed between her cargo.

1978: Captain. Rasmussen retires after 37 years on the “Albatros”. “Albatros” laid up in Copenhagen. 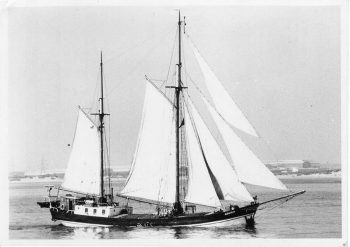 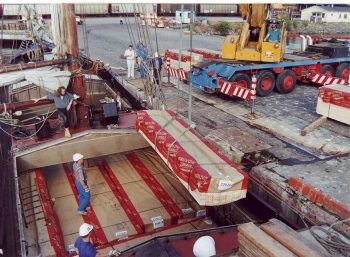 1980: Captain. Ton Brouwer buys the “Albatros” and sails her to Amsterdam.

1987-1997: Ton Brouwer captains the “Albatros” as Europe’s last cargo ship under sail in the Home Trade and the Baltic trade taking on disaffected youths as a crew and sailing about 20.000 nautical miles per year with different cargos to several ports around Northwest Europe.

1990-1996: “Albatros” becomes a regular visitor in the port of Wells-Next-The-Sea bringing more than 100 cargos of soya bean meal from the continent.

1996: On September 5th 1996 the “Albatros” delivered 100 tons of soya bean meal from Rotterdam to the North Norfolk port of Wells-next-the-Sea. Those who stood on The Quay two days later and watched her sail back to Holland were present at an historic moment: The “Albatros” was the last sail driven cargo ship in Europe and this marked the end of her 98 year career as a freight carrier.

1998-2000: “Albatros” chartered by Greenpeace and used as a waterborne venue for children’s environmental education along the coast of Holland.

2001: “Albatros” based in Wells-Next-The-Sea where members of Wells’ maritime community have formed a Trust called “The Albatros Project” to support the use of the ship as an educational centre. In order to keep her commercially viable the “Albatros” is available for luxury cruises, sail training, executive development and corporate entertainment.

2005: The Albatros Project stops and the Trust is dissolved. In addition to the sailing program Ton Brouwer looks at the possibilities of using the ship as a bar, restaurant and music venue alongside the Wells Quay. After approval of his plans by the Wells Harbour Commissioners Ton Brouwer obtains his publican license and a premises license for the ship from North Norfolk District Council. 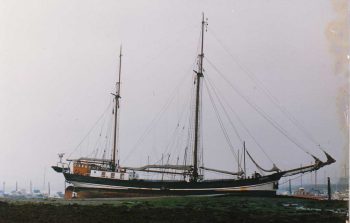 2008: The Albatros makes its last commercial sailing trip with guests in July. From then on, the sale of real ales and pancakes becomes a full time all year round business.

The hull survey report shows that she was recently out of water at Alicat Working Boats in Great Yarmouth. As a result: some re-plating under the foc’sle. The full length of the waterline was blasted back to bare metal followed by epoxy primer and 3 layers of coating.

The ship has been used during the last 12 years as a very popular floating Bar, Restaurant, B&B and Live Music Venue alongside The Quay in Wells-next-the-Sea, North Norfolk. The Quay with stunning views of the marshes and the Channel is a top beauty spot and attracts always many visitors. The ship enjoyed many returning customers each and every year. She proved to be a good business. The Bar/Restaurant area below deck can seat 55 people and on the deck there is room for approx. 80 people. She was used for live music events private functions, anniversaries/ wedding receptions and dinner parties. The Galley is fully equipped with 2 freezers, 2 fridges, 2 fridge-freezers, 3 microwaves, 2 worktops and a 5-burner gas hob incl. wok burner and plenty of storage cupboards.

The ship offers a wide range of other possibilities for a buyer: As a Houseboat with plenty of living space, an annex artist studio or workshop. The Galley can be easily refurbished into the original galley annex mess room and saloon. Self-catering holiday accommodation. A Botel, Conference Venue- A Charter or sail training ship.

The Albatros, an old Dutch clipper turned real ale pub, is a memorable place to stay on the north Norfolk coast

Captain Ton Brouwer has converted the North Sea clipper Albatros into a floating pub with rooms in Wells-next-the-Sea, Norfolk.

Permanently moored among the pleasure craft and fishing boats in the harbour of Wells-next-the-Sea is a 114-year-old North Sea clipper, a former Dutch cargo ship. Restored by Ton Brouwer, who captained it on its last commercial voyage in 2008, the Albatros is now a pancake restaurant, bar, music venue and B&B, offering one of the most entertaining ways to spend a couple of hours (or a couple of nights) on the north Norfolk coast.

Captain Ton, a sea-crinkled Dutchman, runs a relaxed ship and dishes up pancakes the size of a lifebelt, served with beers from Woodforde’s Broadland Brewery in Woodbastwick. “I think she’s the only pub-like ship of her kind in the UK,” he says, “and the only one registered in the Good Beer Guide.” Guests can eat on deck, and watch the bustle of the quayside, and the bobbing boats, or below, where a musician is often found strumming on a guitar.

Accommodation is in cabins and breakfast is served on deck as the sun comes up. The boat is a memorable place to stay after a day exploring the Georgian architecture and independent shops of Wells-next-the-Sea (visitnorfolk.co.uk) or vast dunes and beaches of nearby Holkham. Watching the sun set over the saltmarsh from the deck of the Albatros as birds come into roost and boats pull into shore is one of life’s simple pleasures. Especially if accompanied by a pint of local ale.

“People can stay on board without getting seasick,” says Captain Ton. “I like to think the Albatros is a bit of Dutch maritime history that I’ve transplanted into Britain.”